Toby Matasar is the Pastry Chef, Co-Owner and Manager of Crumble and Flake Patisserie. 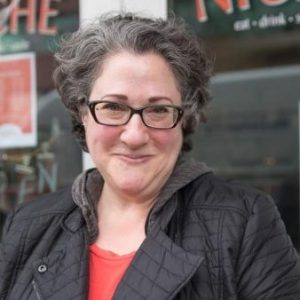 She began her career in New York working for Anne Rosenzweig, who would become her mentor and guiding light, as the Pastry Chef at The Lobster Club and Arcadia.  She continued in New York working at The City Bakery and Sarabeth’s.  Later, she would attend L’École Lenôtre in Plaisir, France, a school specifically designed to bring professional pastry chefs together from around the world for extensive training in French methods.

She came to Seattle in 1999 as the Corporate Executive Pastry Chef for the Tom Douglas Restaurant Group. She was the opening chef of the Dahlia Bakery and created the famed “Dahlia Doughnuts”, along with the restaurants, catering company, and the myriad of other ventures with Tom. She went on to open the award-winning Eats Market Café in West Seattle, a neighborhood favorite with a devout following that loved its “pedigreed comfort food.”  She created the baking company Sweet Toby’s, which provided pastries to Whole Foods, Metropolitan Markets, and Central Co-op. Following Eats, she opened Niche GF Café and Bakery, the first dedicated GF café where she created her beloved focaccia paninis, waffle-inis, and devine pastries.

Currently, she owns Crumble & Flake Pâtisserie with her partner, Geoff, and lives with her son, her dog Penney, and her cat Caudi in Seattle.

We are a little patisserie making pastries in small batches with precision and love. We specialize in croissants, pain au chocolat, kouign amanns, canelés, and quiche. A fresh take on classic French pastries is why we show up every day. Visit our Capitol Hill location in Seattle to pick up a treat for yourself or a box for your party at home or work.